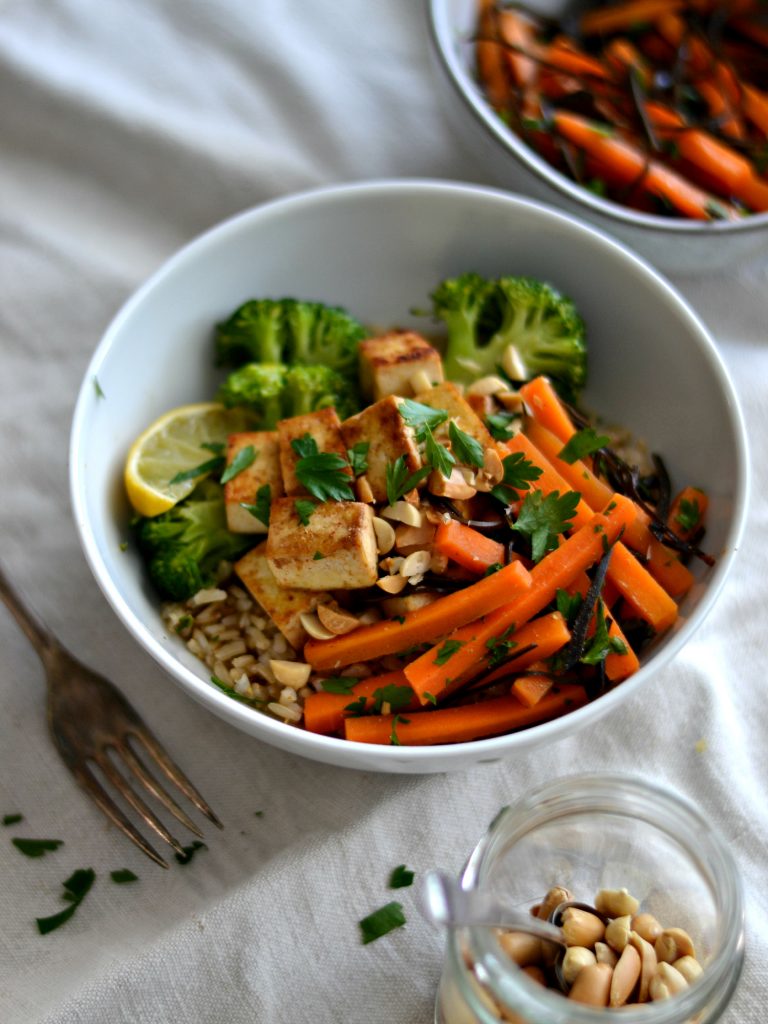 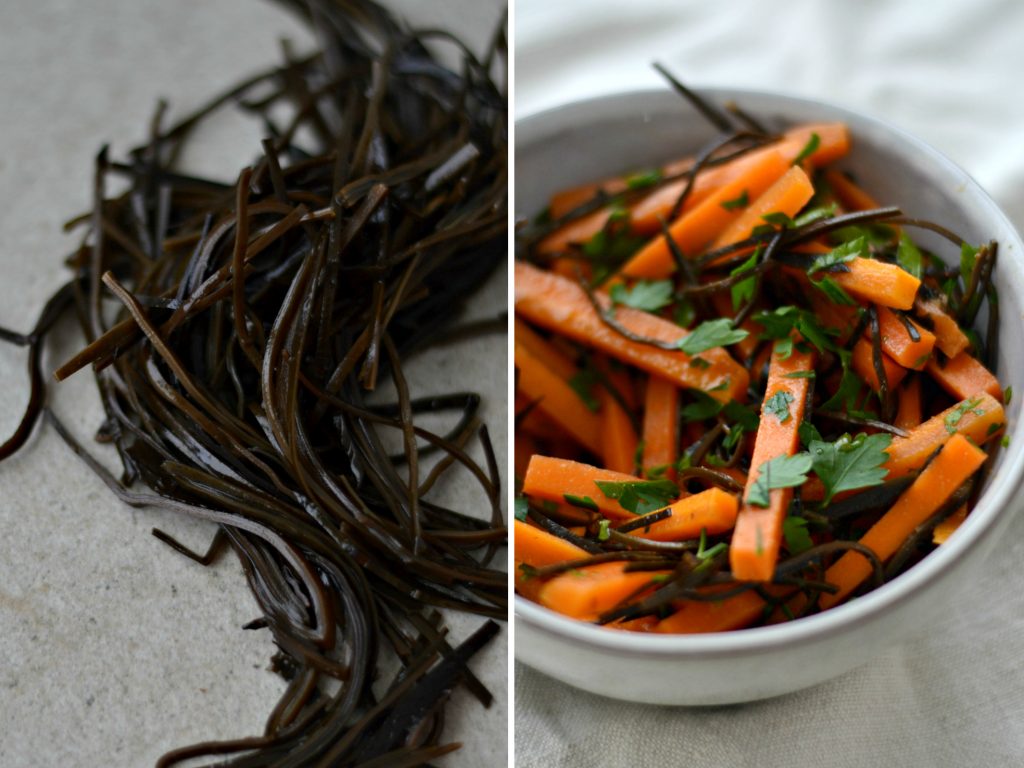 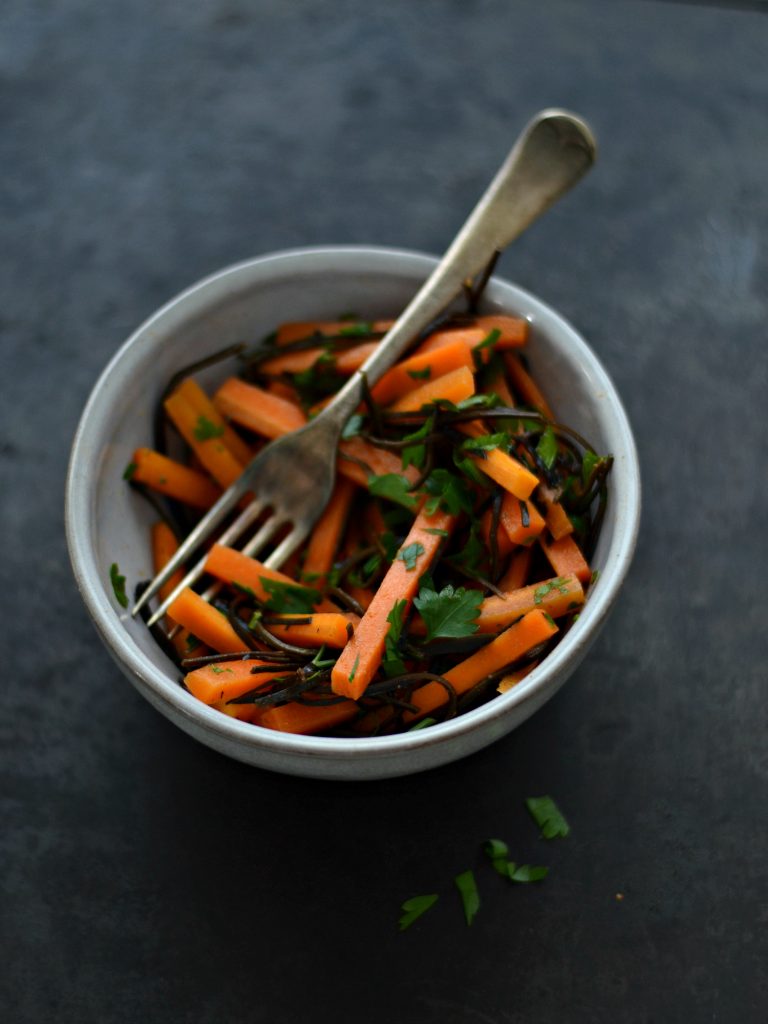 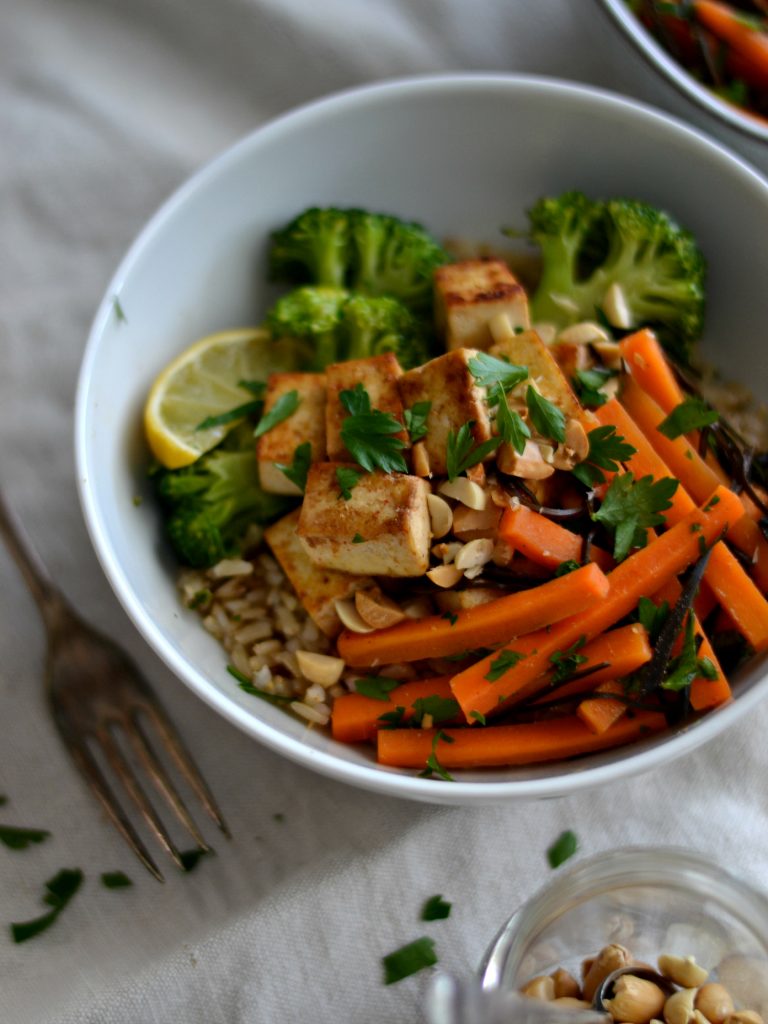 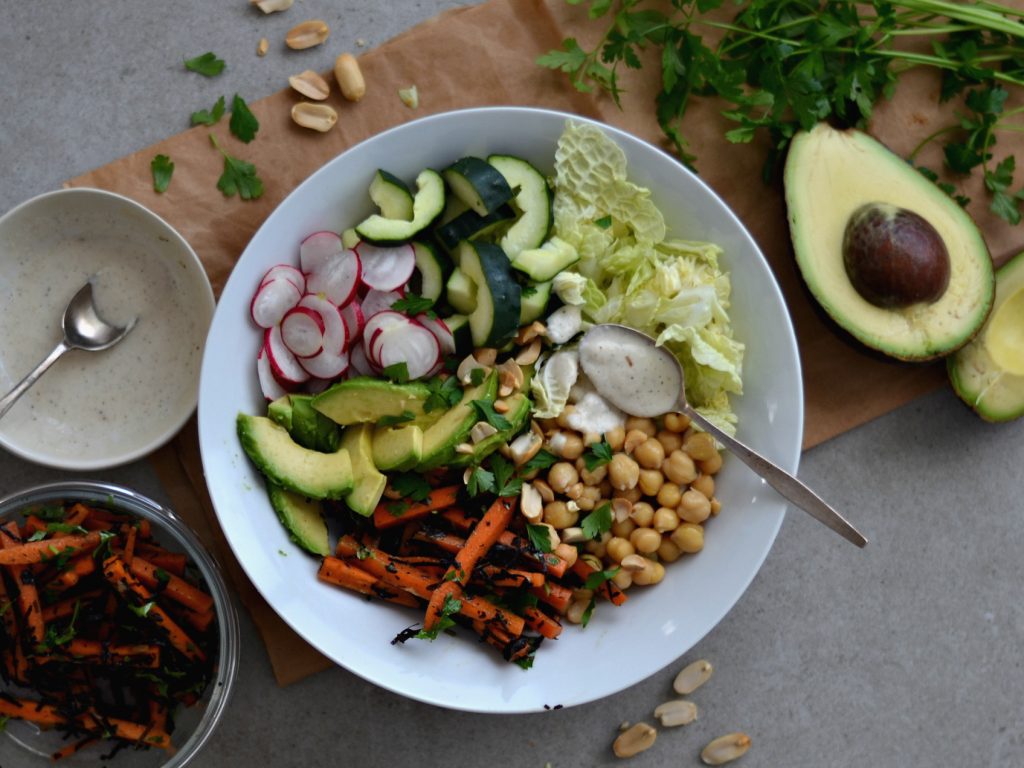 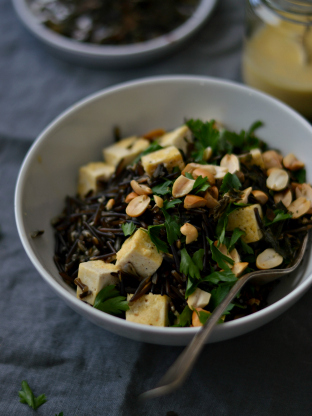 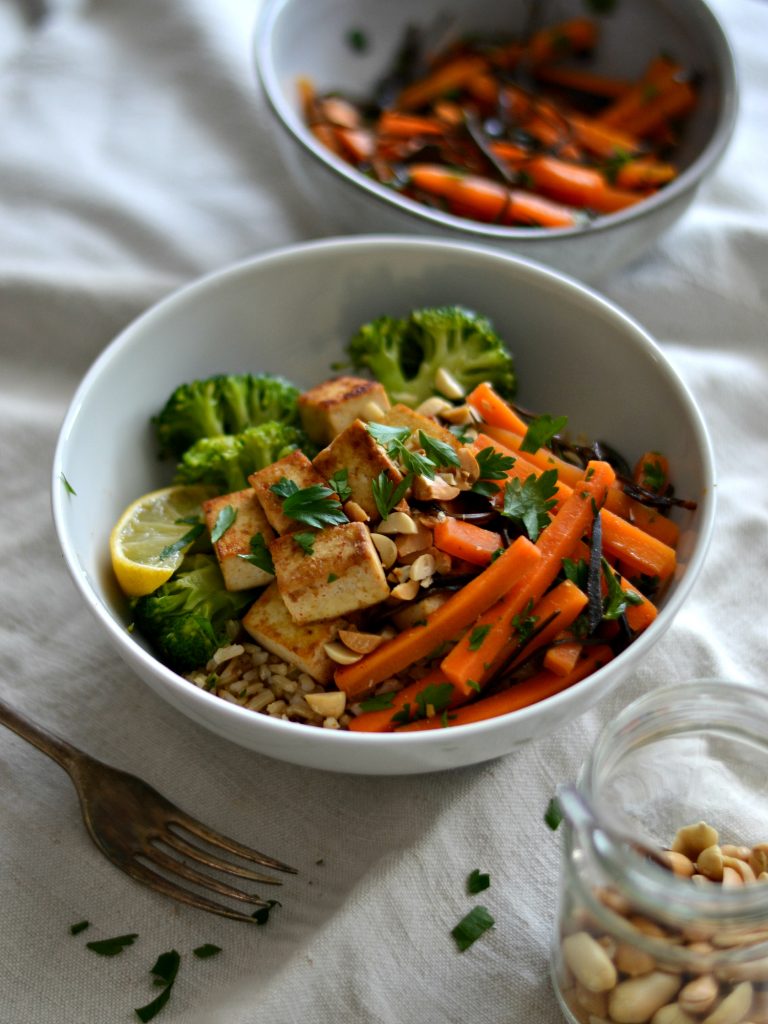 It has recently been suggested in the comment section that I should share recipes with seaweeds, specifically with wakame. Thus, I wanted to leave you some culinary tips to the preparation and confection of the most common seaweeds: and, of course, some nutritional considerations related to their consumption.
Seaweed, from the taxonomic group Algae, feature a huge diversity of organisms when it comes to morphology, complexity and size; they can be divided in macro and microalgae. Several applications can be considered, from the extraction of compounds such as carrageenan and alginate, which exhibit thickener, gelling and stabilizers of suspensions and emulsions, to the usage as bio fertilizers, bio indicators and, of course, they can be used in a diet at the minimum processed stage.
Despite the abundance of seaweeds in the Portuguese coast, using them as part of a diet is not common in Portugal, excepting some coastal communities in Azores. But the interest in seaweeds as a food is increasing, due to the recognition of its nutritional value, mineral content, oligoelements and omega-3 fatty acids.

The analysis of the nutritional composition was performed in a portion of 8g of dehydrated seaweeds because it seems to be the typically consumed daily portion in the Asian gastronomy. (1)

Protein: The protein content of seaweeds differs according to the species, and seems to vary between 3 to 47% of the dry weight, being that the Nori seaweed (Porphyra tenera) can reach 47% of its dry weight in protein and Wakame (Undaria pinnatifida) presents values between 11 to 24% of protein of its dry weight. Regarding the protein quality, information of the protein digestibility is rare; despite that, its content in nutritionally essential aminoacids such as histidine, leucine, isoleucine and valine seems to be similar to the amount found in pulses. (1)

Fibre: 8g of (dehydrated) seaweeds provide, on average, about 12,5% of the fibre’s recommended daily intake.
Polyunsaturated fatty acids: Seaweeds seem to provide essentially EPA, although information related to the DHA content is still very limited. The amount of EPA, in 8 g of dehydrated seaweed, seems to vary between 79,2 mg in the wakame seaweed and 198,2 mg in the nori seaweed. (2)

Minerals and oligoelements: Seaweeds show an interesting amount of minerals and oligoelements given their marine habitat. Of these compounds, I’d like to highlight the calcium and the magnesium content in just 8g of the Kombu dehydrated seaweed and the iron content of all of the seaweeds presented below. (1)
It’s also possible to see that iodine is an abundant oligoelement in seaweeds and its content in all of the here reported seaweeds seems to be higher than the maximum daily intake of an adult individual (1,1 mg/day). (1) The consumption of seaweeds and iodized salt is recommended in a vegan diet in order to achieve the recommended daily intake of this oligoelement; despite that, and due to the high and highly variable content of iodine in seaweeds, these should be carefully consumed, being that the frequency of consumption shouldn’t surpass the 3 to 4 times a week. (3)

Vitamine B12: Some authors consider that seaweeds, mainly the nori variety, could be a source of vitamin B12 in the vegan diet. However, seaweeds contain inactive analogues of this vitamin, reason why they shouldn’t be used as vitamin B12 sources; they may even interfere with this vitamin’s absorption. (3, 4)
With that being said, seaweeds can be considered nutritionally rich, mainly when it comes to their mineral and oligoelements content, representing a valid source of iodine in the vegan diet. However, this aspect can be a double-edged sword and it should be noted that, given their high content of iodine, the consumption of seaweeds should be moderate and somewhat careful. When it comes to the hijiki seaweed in particular, besides the iodine aspect, its consumption should be avoided by humans because it can significantly increase the dietary exposure to inorganic arsenic. (5)

Preparation and confection of the Seaweeds

Before I give you some suggestions for the preparation and confection of seaweeds, I’d like to share a brief presentation of each seaweed, so you can understand a little bit better how they can be used in cooking.

Arame: The big black leaves of this seaweed are cut and dried into thin sticks. It should be soaked for about 10 minutes and can be added to soups or stews. As it’s pre-cooked during the processing, it needs little cooking time.
Dulse: Reddish seaweed that doesn’t require cooking. Its flakes can be used as a flavouring in salads, soups and stews.
Hijiki: Black seaweed that resembles spaghetti. It should be soaked for several minutes before cooking, in order to reduce its salty flavour. It’s often added to stews, soups and salads (after it’s been cooked, contrary to Dulse).
Kelp: Often sold in the form of powder, it can be used as a seasoning, providing a more refined taste to salads, vegetables, cereals or cooked pulses.
Kombu: Added to the pulses’ cooking to improve the digestibility. It can be added during the broths’ preparation, in order to enhance their flavour, and be posteriorly removed.
Nori: Sold as thin seaweed sheets, it’s often used to make sushi rolls (makizushi). It can also be toasted and used as a seasoning, in pieces, speckled into salads or stews.
Wakame: It should be soaked for, at least, 10 minutes. It can posteriorly be cut into thin sheets and added to soups (miso soup, for example) as well as added to salads.

Now… How do we prepare them?
– They can be added to salads, with varied vegetables, in a wakame or arame salad, for instance, with carrots and cucumbers cut into julienne strips with avocado slices. Another option would be, for example, a salad with pulses (such as edamame, among others) with greens, seasoned with tamari and orange juice. The arame, hijiki and wakame seaweeds should be soaked and boiled before being added to salads.
– Roast the seaweeds (dulse, nori and wakame) as I’ve described in this previous recipe and add to salads as a seasoning, because of their flavour, or even to give a crunchy touch (photo above, on the left). I recently attempted to roast nori seaweed leaves as well, cut into small strips, adding them to the miso soup (suggestion on the right photo).
– Add them to stews or soups, during the broth’s preparation, given their flavor and nutritional value. A classic example is adding them to the miso soup, although I also like to add them to stews with tofu cubes, tubers, mushrooms, snap peas (easily found in this season), pumpkin and some other dark green vegetables, seasoned with soy sauce or tamari, mirin, miso, garlic, ginger or chillis.

Carrot and Arame seaweed, with ginger and coriander
Serves 2

Soak the dehydrated seaweed in boiling water for about 10 minutes. Drain the water and set aside. Cut the carrot in sticks. Parboil the carrot sticks for 2-3 minutes in boiling water. Take them from the water and store for a bit. Prepare the salad sauce, mix the olive oil with lime juice, ginger, parsley or coriander, salt and black pepper. In a bowl, mix the carrot sticks, the soaked algae, and the ginger and lime sauce. Adjust the seasonings to taste and serve.
You can serve this salad with pulses, as suggested in the photo of the chickpea with radishes, cucumber, cabbage, avocado and tahini sauce. Or, for example, with tofu (cut into small cubes, seasoned with soy sauce, paprika, ginger, salt and black pepper, all sautéed in a dry nonstick skillet in medium/high flame for a couple of minutes), with cooked rice, greens as desired and toasted peanuts (optional). 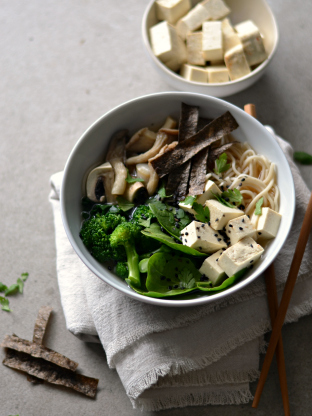 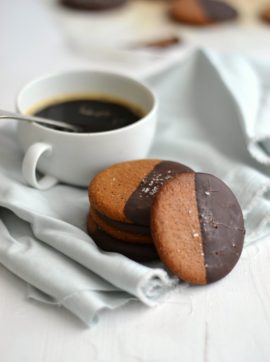 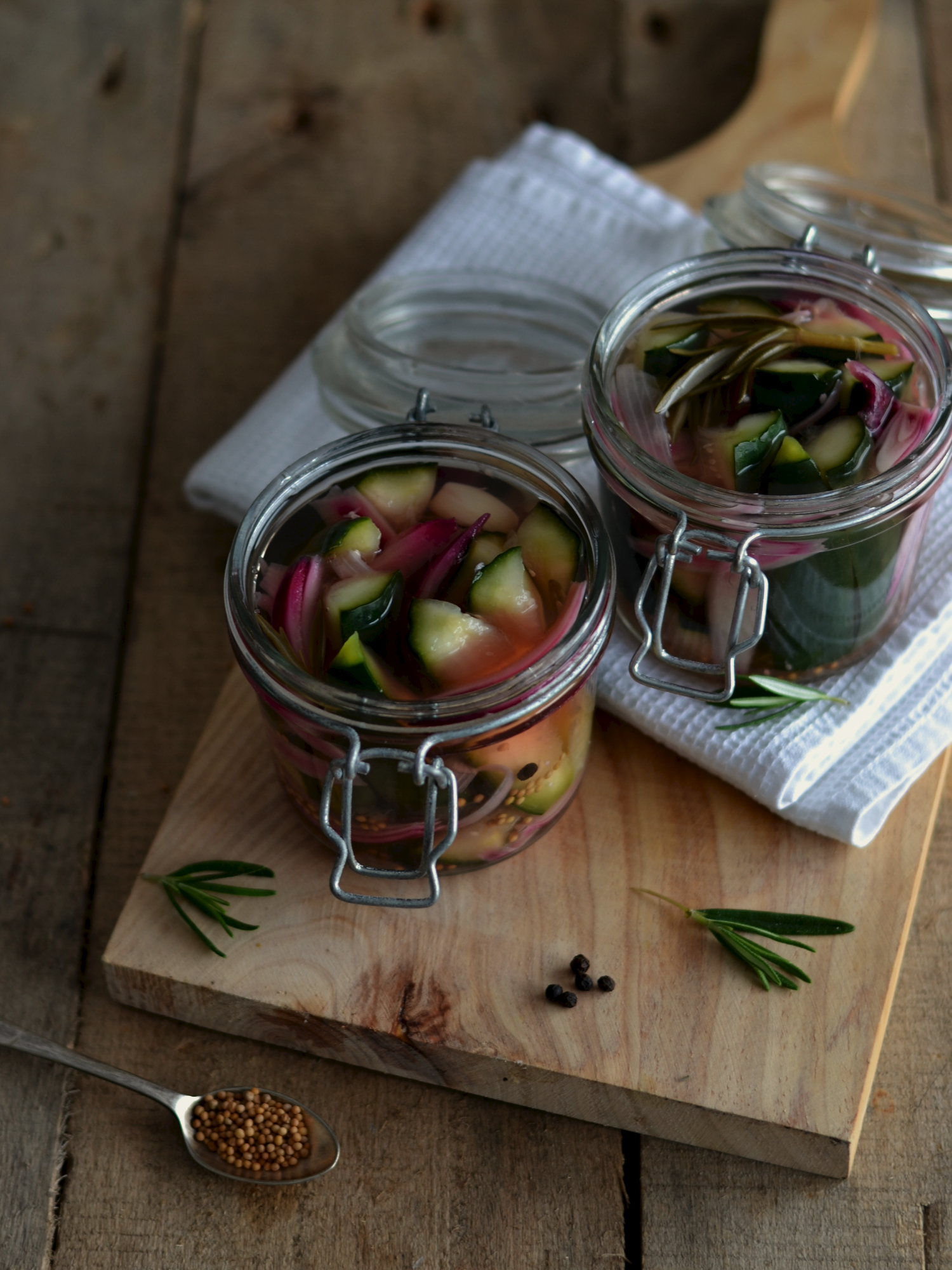 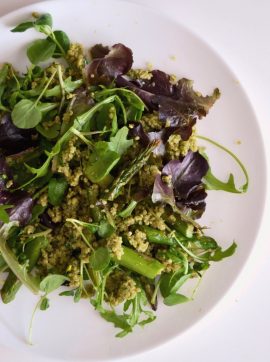 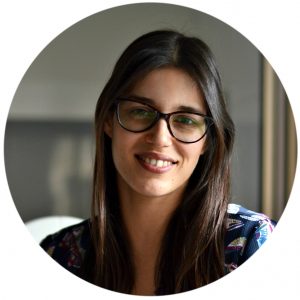